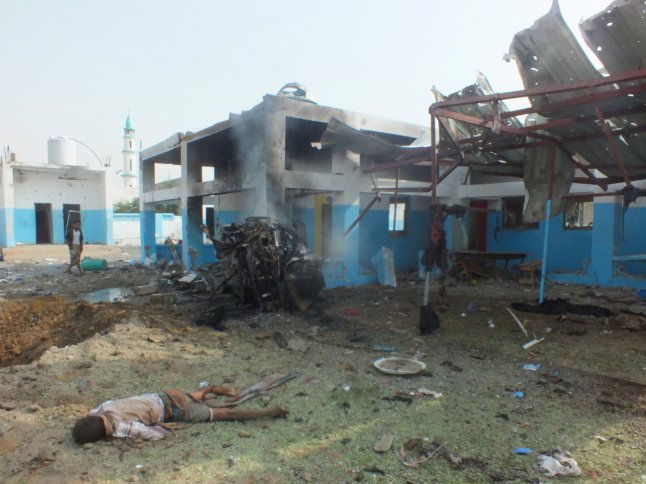 A body at the site of an airstrike on Monday at Abs Hospital in Yemen’s northern Hajjah Province. Photo by Reuters. Used in the following NYTimes article: http://www.nytimes.com/2016/08/16/world/middleeast/yemen-doctors-without-borders-hospital-bombing.html

If you think you’ve been reading a lot about violence against health care facilities and health care workers in recent years, you have. Between January 2012 and December 2014, the ICRC documented 2,398 incidents of violence against health care in 11 countries. In Pakistan, the fight against Polio has suffered setbacks as a suicide attack targeted a vaccination centre in Quetta in January and a drive-by killed three vaccination workers in April. Last March, ISIS attacked the Ibn Sina Hospital in Sirte, Libya and abducted 20 aid workers. In Syria, the healthcare system has been systematically attacked and depleted: in the space of a week, 6 hospitals have been bombed in and around Aleppo. And just two days ago, a hospital supported by Médecins Sans Frontières (MSF) was struck by airstrikes by the Saudi-led coalition. Overall, some attacks or strikes have been (questionable) mistakes while others read like deliberate acts of violence meant to punish and intimidate adversaries as well as the civilian population in dire need of care in addition to food, water, shelter, and respite from violence.

Is the targeting of hospitals and medical workers the “new normal“? Or are we just ‘seeing’ them more? In other words, does the increased visibility – namely increased news coverage – of attacks against health care represent a new, increasing, and disturbing trend in armed conflict or are we just more attune to this particular form of violence?

It’s hard to say for at least three reasons. First, we simply do not have good enough data to make a claim either way. Citing Leonard S. Rubenstein from the Johns Hopkins Bloomberg School of Public Health ad Melanie D. Bittle from the U.S. Institute of Peace, Betcy Jose notes in a recent article in Foreign Affairs that “‘no systematic reporting of assaults on medical functions in armed conflicts is in place, and no comprehensive review of the problem” has been conducted in years.” However illuminating, recent attempts like the ICRC’s Health Care in Danger (HCiD) project, Physicians for Human Rights’ (PHR) Critical Condition and Anatomy of a Crisis which focuses on Syria, the World Health Organization (WHO) Attacks on Health Care, and the Safeguarding Health in Conflict (SHiC) coalition are explicit stating that their data and reports are not comprehensive and should not be used to make claims about trends in violence against medical personnel and infrastructure in armed conflict and other crises.

Second, it’s difficult to identify what kind of data we would need to make this type of claim. HCiD, PHR, WHO, and SHiC, are similarly interested in documenting attacks on health care but operationalize “health care” or “health care facilities” differently. If we are to rely on open sources to systematically document attacks on health care globally and over time, we not only need standardized operationalizations but also need to consider what types of attacks on health care – here I mean on medical infrastructure (e.g. clinics, hospitals, field hospitals, ambulances and the like) and personnel – are more or less likely to be reported. If the research on civil war and violence against civilians tell us anything, reports are likely to be skewed favoring urban areas and larger events. This means researchers may need to focus on a subclass of infrastructure or personnel that are more likely to be covered in news media. Perhaps we should focus on larger hospitals with dedicated surgical medical wings as these are “bigger” and likely to be located in urban areas. This might help alleviate the problem of increasing visibility over time rather than increasing violence but also has potential costs.

These costs are tied to a third reason making claims about trends on violence against health care are difficult: focusing on a subset of events might allow us to make a claim about trends that are empirically valid while the substantive weight of that claim is unclear. If the events we focus on affect far fewer persons than the events we cannot or choose not to cover, what are we losing by focusing on events that are more visible but far less critical to populations in armed conflict? The means by which health care is provided vary widely by country to country and even by regions within a specific country. Focusing on one subset of events – say attacks on hospitals with a dedicated surgical wing – is likely to reveal wide variation in part because such hospitals are far less common in some places than others.

Part of my dissertation project involves grappling with these issues, identifying a workable but far from ideal solution, and putting together a dataset that could be used to make the kinds of claims I have just argued are so hard to make. I’m currently leaning toward focusing on hospitals with surgical wings, hospitals that regularly provide surgical services particularly in times of not-war, or hospitals supported by international organizations like MSF. As discussed, doing so is ripe with issues but it’s not clear how I/we can or should move forward.

In the next few days and weeks I’ll be speaking with members of different organizations engaged in the process of documenting attacks on health care in an effort to better understand the obstacles they faced in gathering data and their thoughts on how I/we might move forward. Similarly, I’d like to get your thoughts. Anyone?